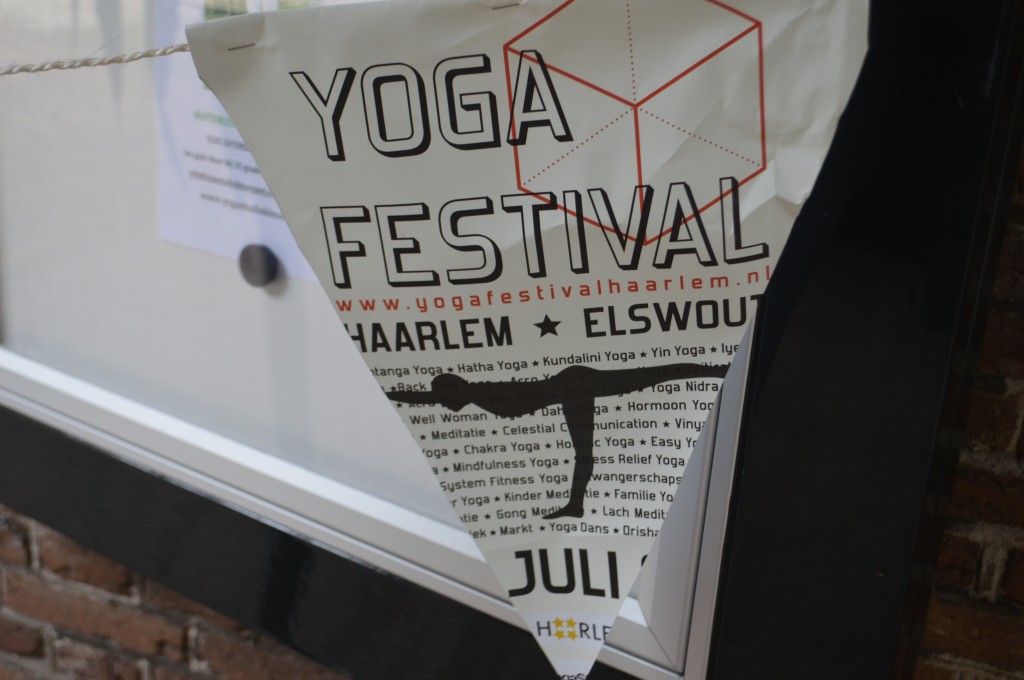 Only one week ago, Yoga Festival Haarlem 2014 edition took place. On Sunday morning I drove to a beautiful estate in Haarlem to check it out. As mentioned, I took a reader with me! 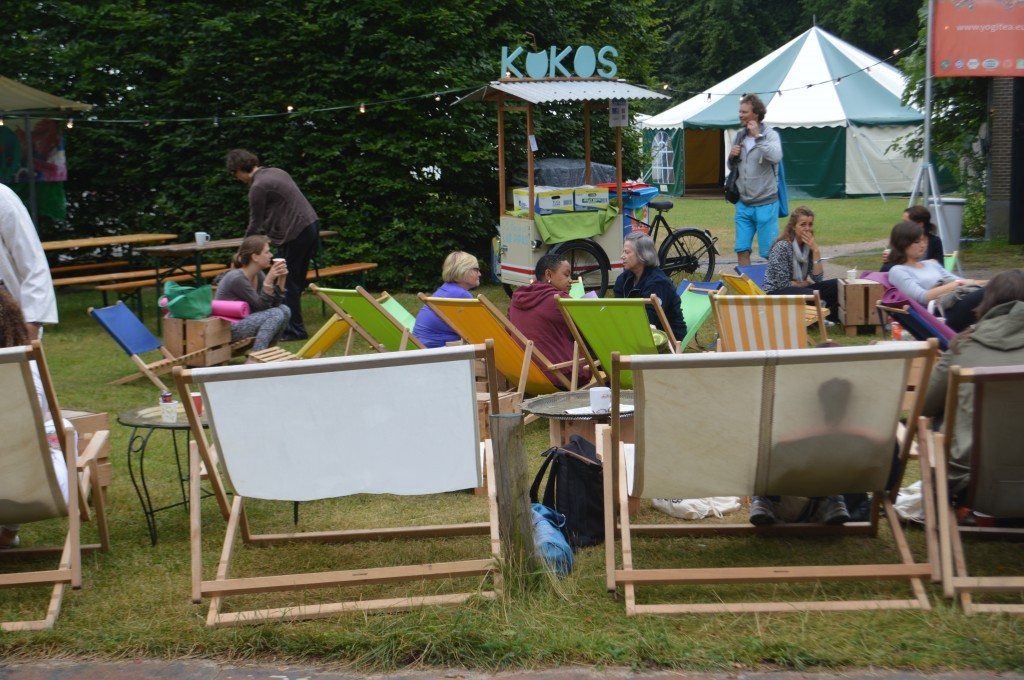 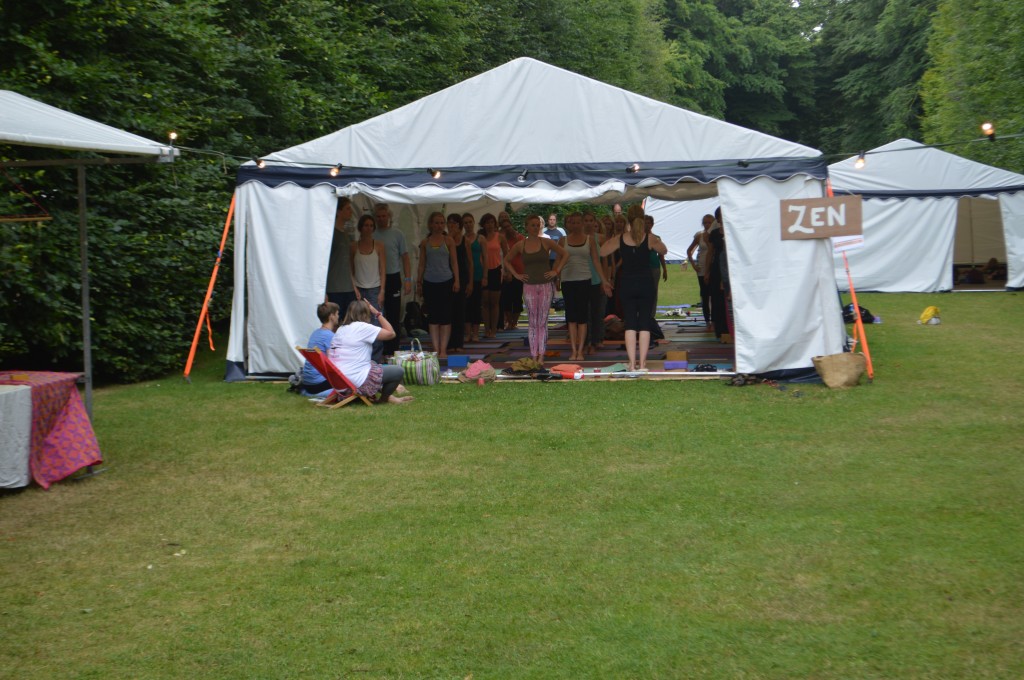 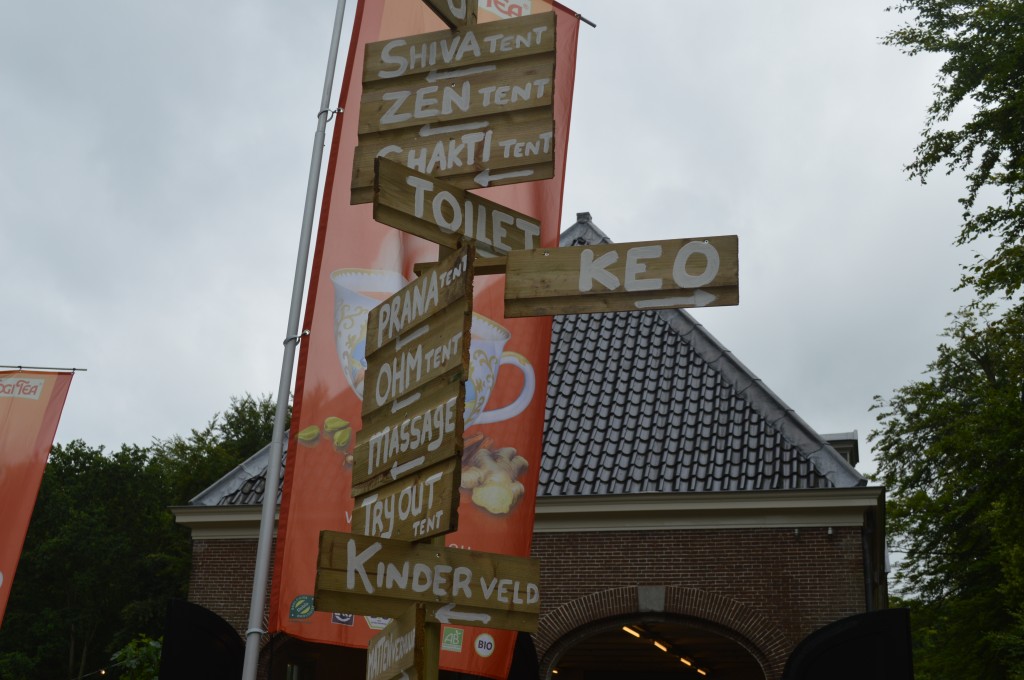 The festival was at the Elswout estate, which is beautiful. Very elegant, and surrounded by green fields and forests. An absolutely perfect pick for a yoga festival like this.

There were a bunch of different tents where different workshops, demonstrations or yoga classes took place. Maartje and I had a few things we wanted to try, both yoga and food wise. 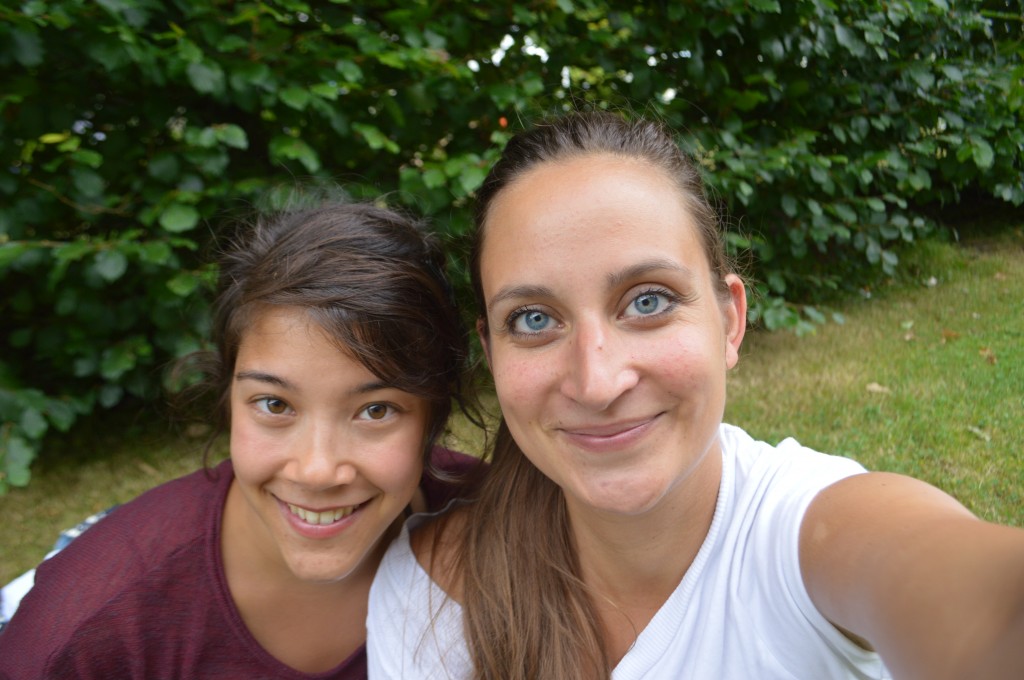 Oh by the way, this is Maartje! She was this ittybitty cute dancer who lives in Vienna but is here for the summer. I loved her enthusiasm for all we were doing (and eating) and she invited me to visit her in Vienna some time. Which is something I am seriously considering doing, because Vienna is beautiful and Maartje is nice/not a psychopath. 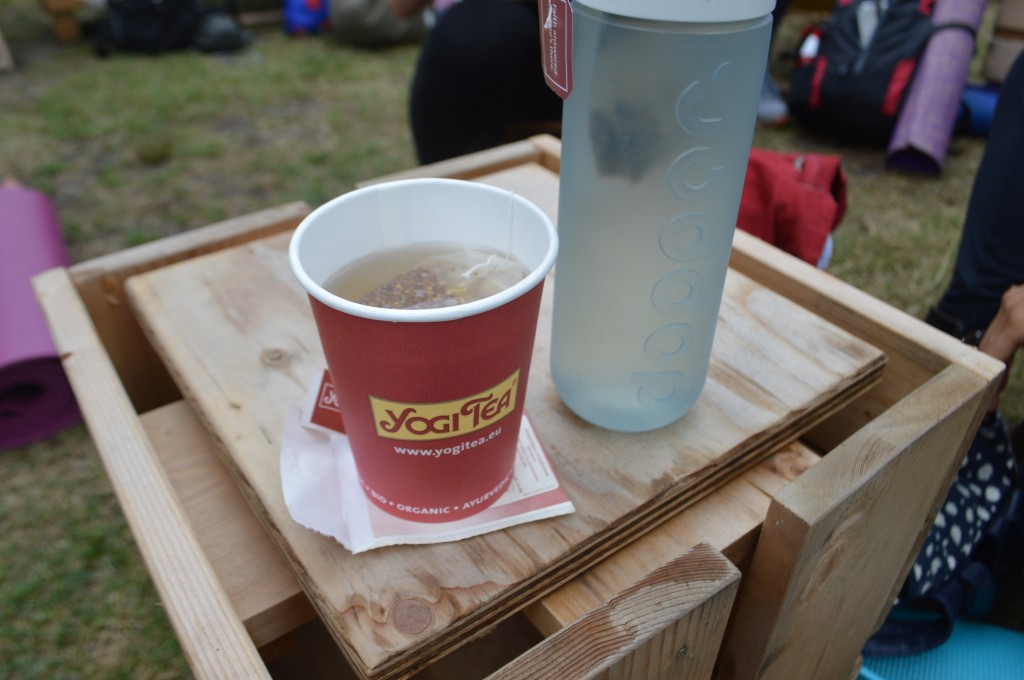 Yogi Tea first. The Festival had a Bring Your Own Mug thing going on (that I forgot about obviously) but there were paper cups for the absent-minded ones like me. 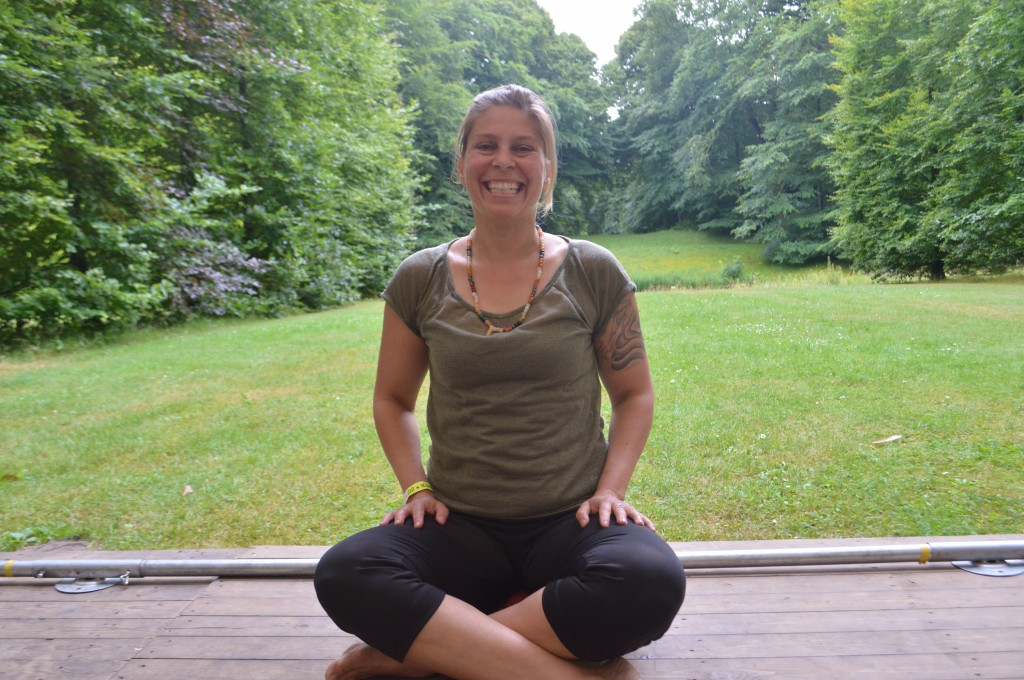 IYENGAR YOGA We started off with an Iyengar class at 10:00 AM with yoga teacher Nancy Reyers. It was a little different because the only prop we used was the floor but Nancy made sure we used it right. The focus was on alignment and she came by every now and then to adjust us into the posture. 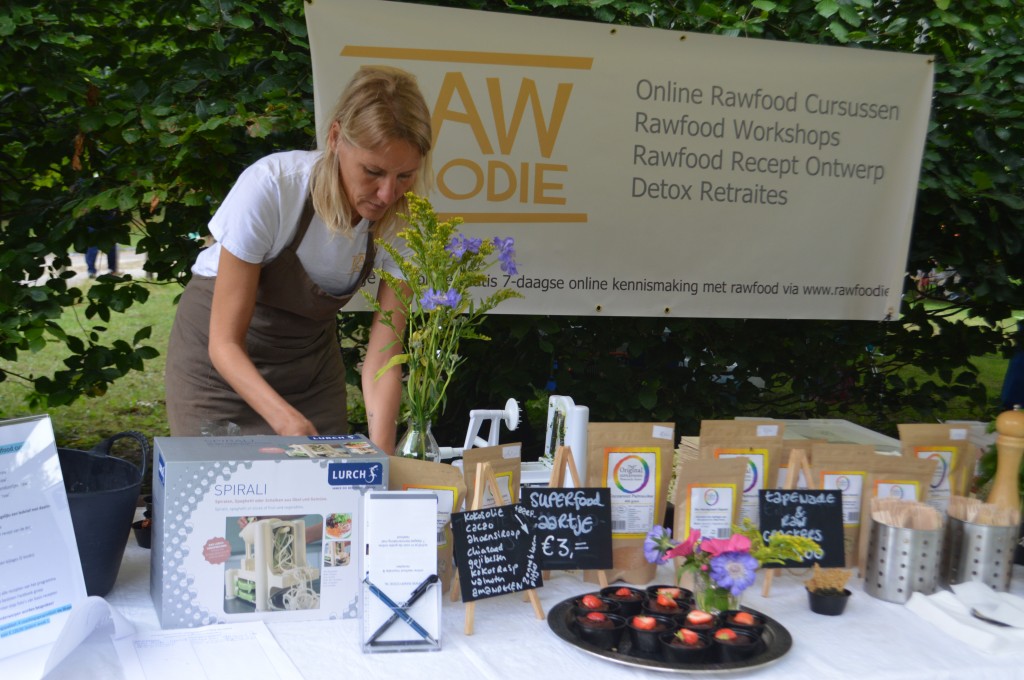 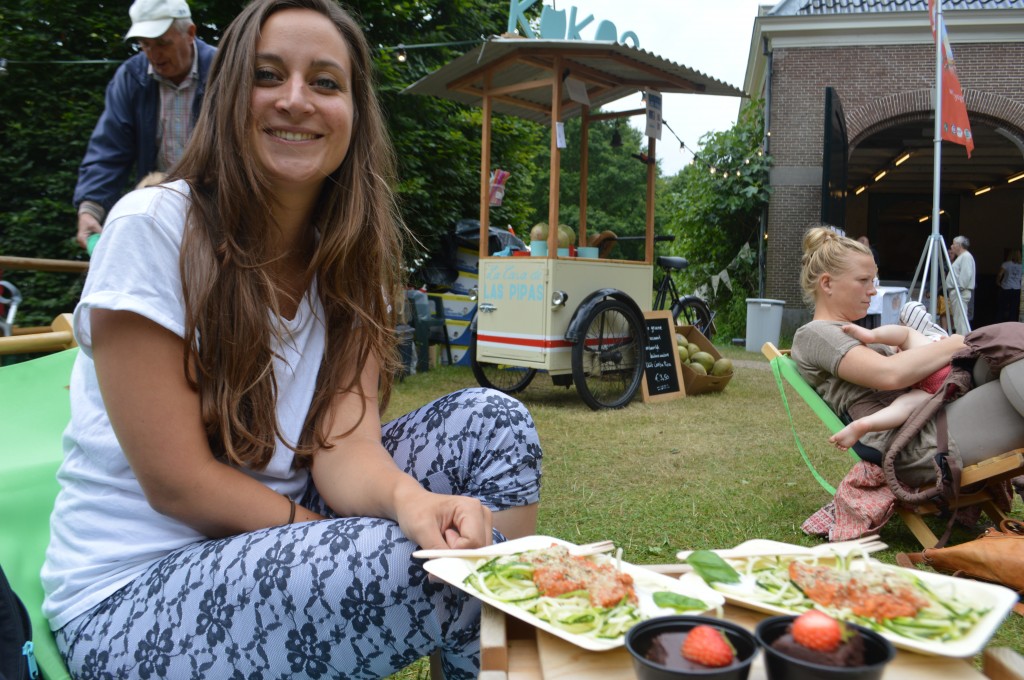 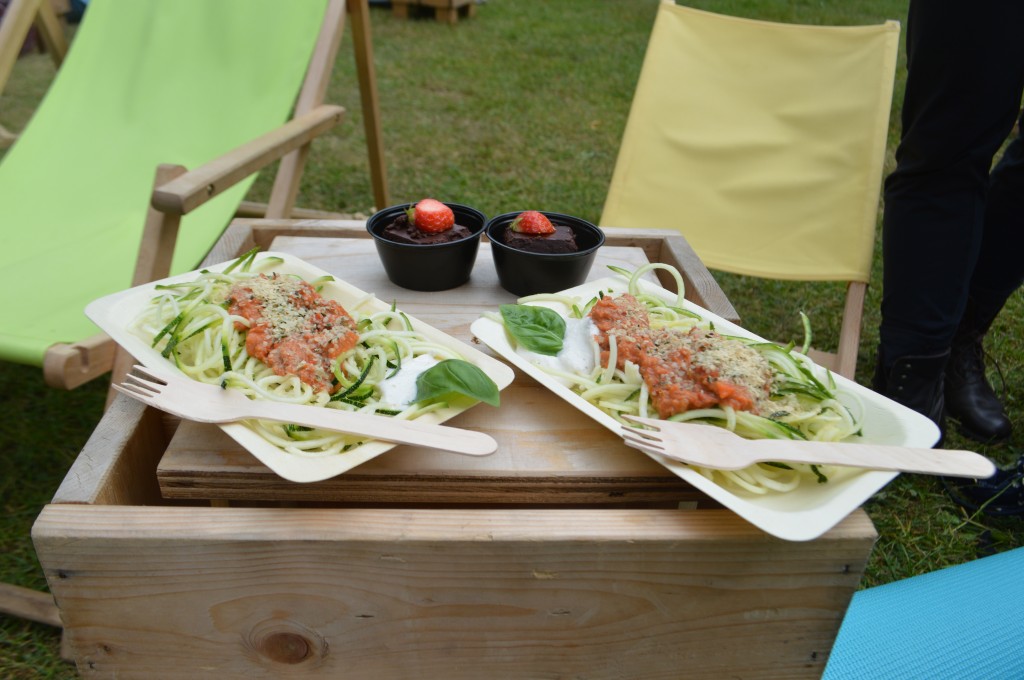 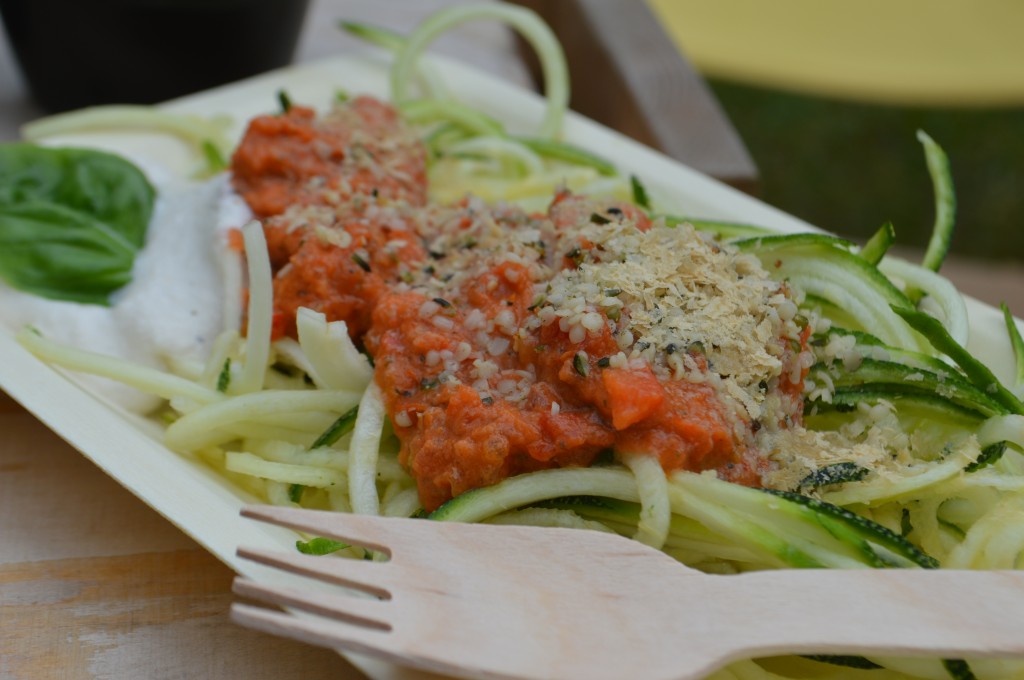 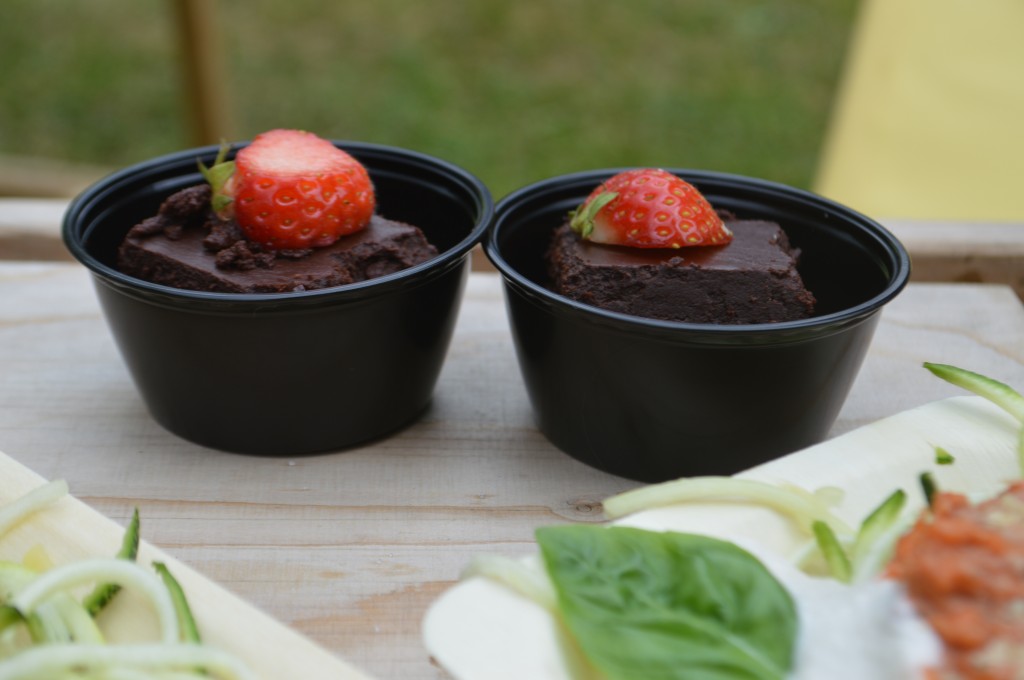 LUNCH Remind me again why I’m not a raw vegan?

The zucchini pasta with sun dried tomato sauce and macadamia creme was out of this world, and so was the raw chocolate cake. All made by Raw Foodie. Who I now have bookmarked for future reference. 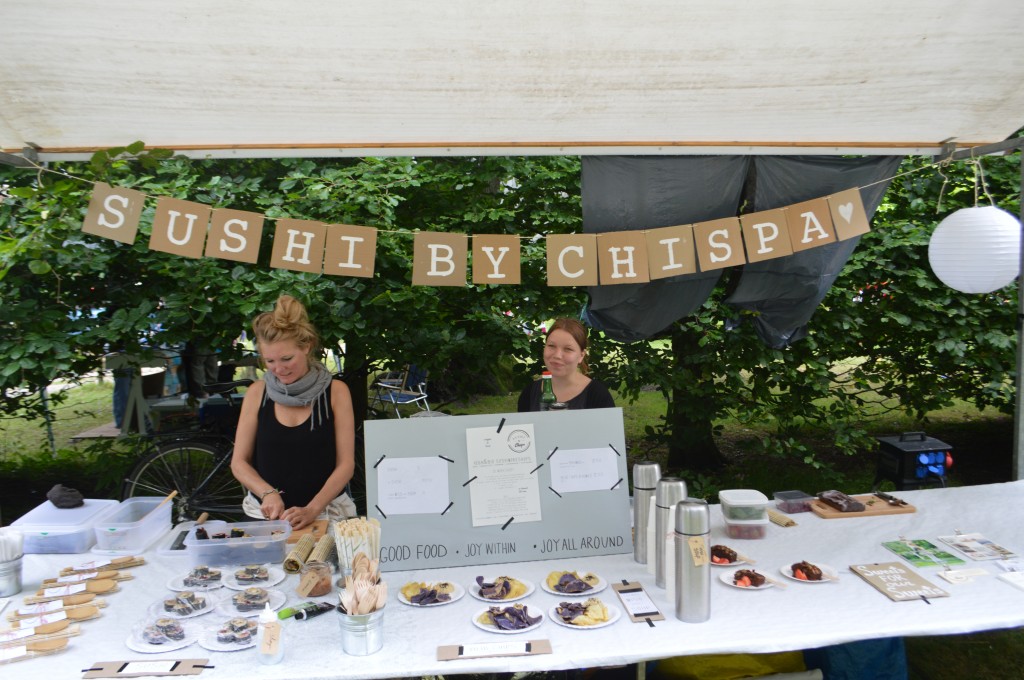 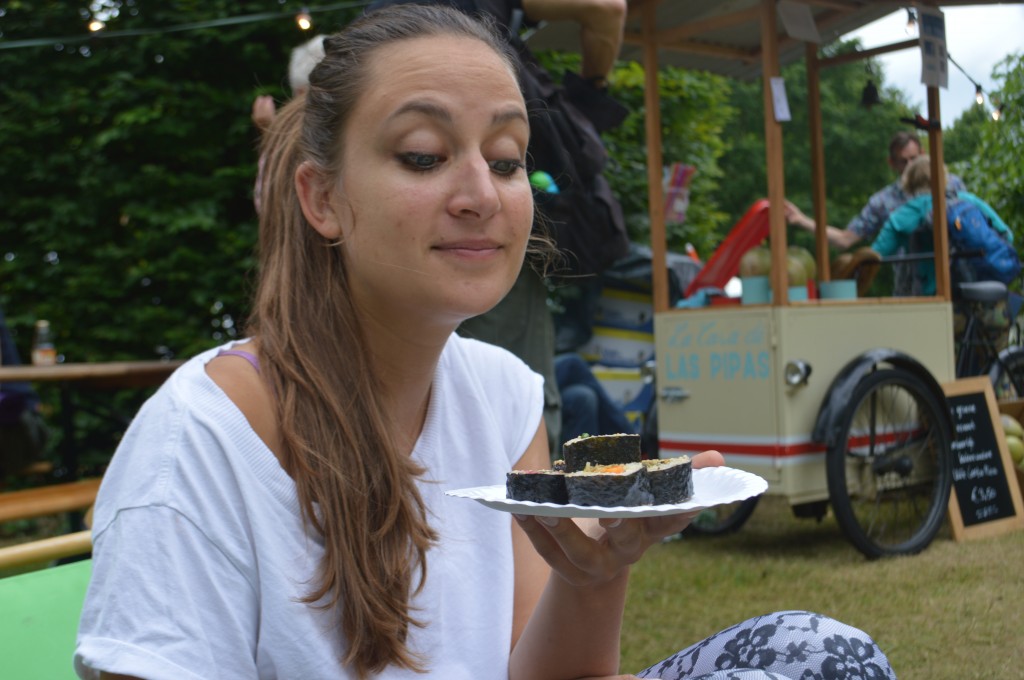 We also had vegan sushi by Sushi by Chispa. Because why not.  I liked the zucchini pasta better, but Maartje liked both of them equally. We lost track of time browsing all the different stands from vendors (there was a YOGA BOOK STAND), we unfortunately were too late to join the Kundalini yoga class. Bummer, because it’s high on my yoga bucket list AND the music coming from that tent was weird as shit and I was totally into it.

We decided to go with a Yin yoga class as Wietske (the person who invited me!) was teaching. It was super chill and Wietske has this perfect lovely yoga teacher voice to listen to, but at one point it started to rain and we were outside, so we cut our class short and ended up at…Yoga Dance. YOGA DANCE I know it looks calm in the picture, but MAN. I loved everything about it, it was so fun. We did Sun Salutations while making sounds, we pretended to be waterfalls, we had to jump with joy through the entire tent, it was so fun. The woman on stage had such presence and calmth I was in awe of her. Turns out it was Helen Purperhart, who is huge in kiddie yoga. 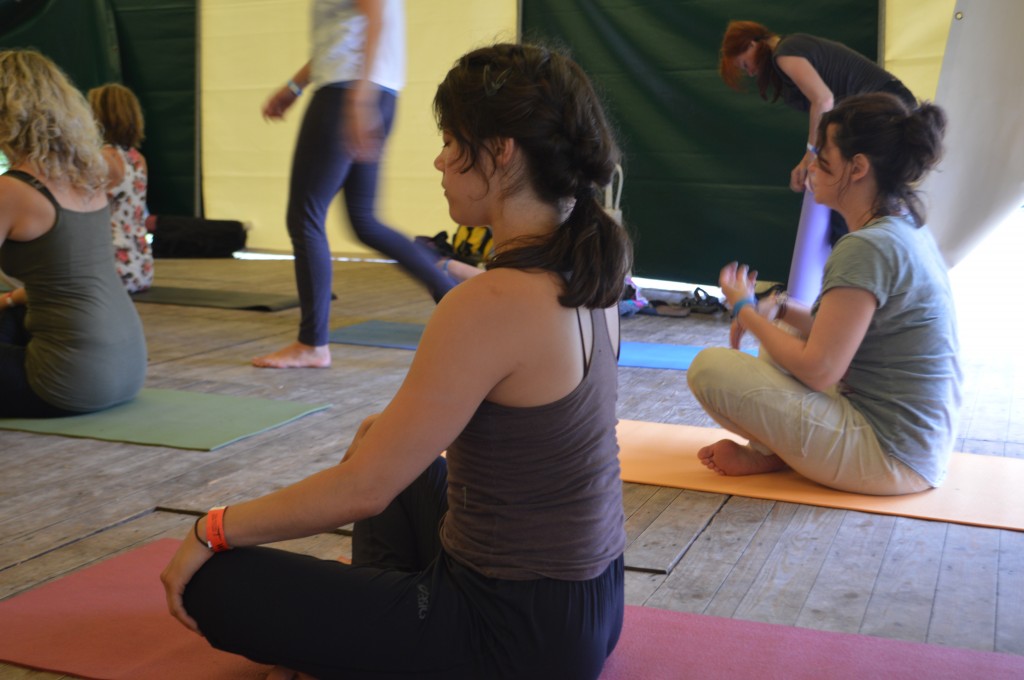 Of course we ended with something calm. Look at Maartje being all chill. 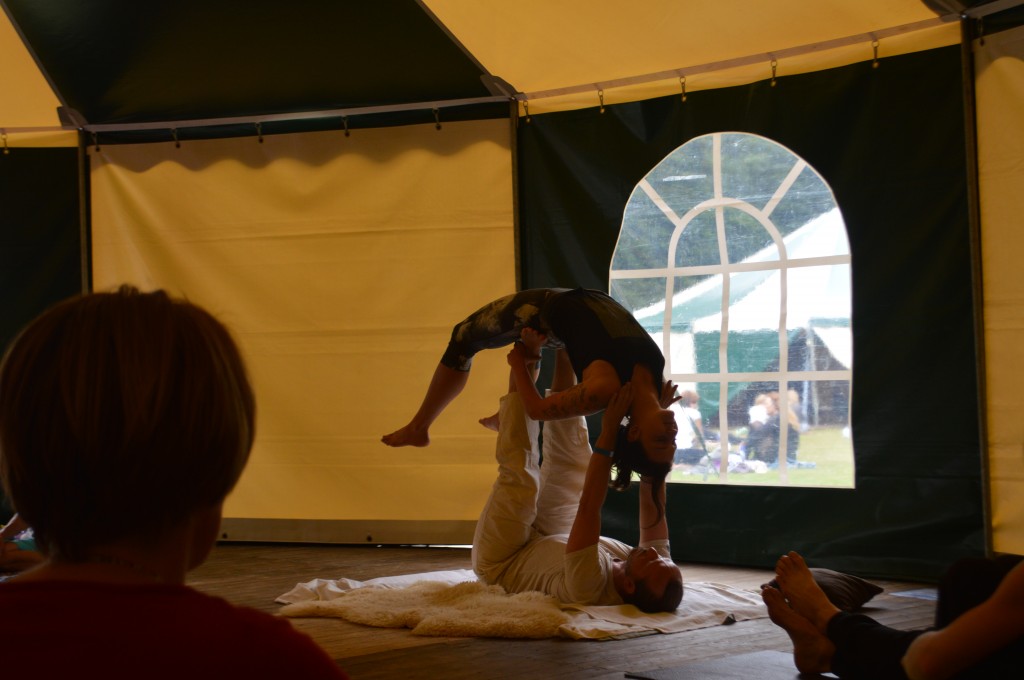 TULA YOGA DEMO At 15:00 we went into the Try Out tent for some Tula Yoga. I had never heard about this in my life, but apparently it was a little like acro yoga, but more acrobatic. I foresaw some issues with flying through the air and what not, but I was excited to give it a go.

Turns out it was “just” a demo, because you really don’t do Tula yoga together: It’s kind of like a yoga massage. There’s the receiver and the giver.

I get that to give Tula Yoga more exposure you have to show it to the world but it is really fucking weird to watch. It seems super intimate and I’m not easily awkward, but watching this made me uncomfortable. I didn’t feel like it was supposed to be watched. Maartje and I decided to leave after five minutes. I heard later that other people felt the same way. We decided we deserved some coconut water and a cacao smoothie before our last yoga class: Asthanga. Maartje was more familiar with this than I was, but I am interested in getting more acquainted with Asthanga. So why not start here?

I didn’t take any pictures of the Asthanga class but it was really, really good. I instantly liked our teacher, Marloes van der Hout and her clear instructions, and even though Downward Dogs kill me, I did everything. Marloes just opened her own studio and I have plans to ask her if I can come check it out and have her teach me more about Asthanga. Finally: This was me breaking out in laughter because of the laugh meditation that was going on in the tent next to us while we were waiting for Asthanga. It sounded like so much fun, you couldn’t help but laugh too. Next time I get the opportunity I am definitely trying that out too. 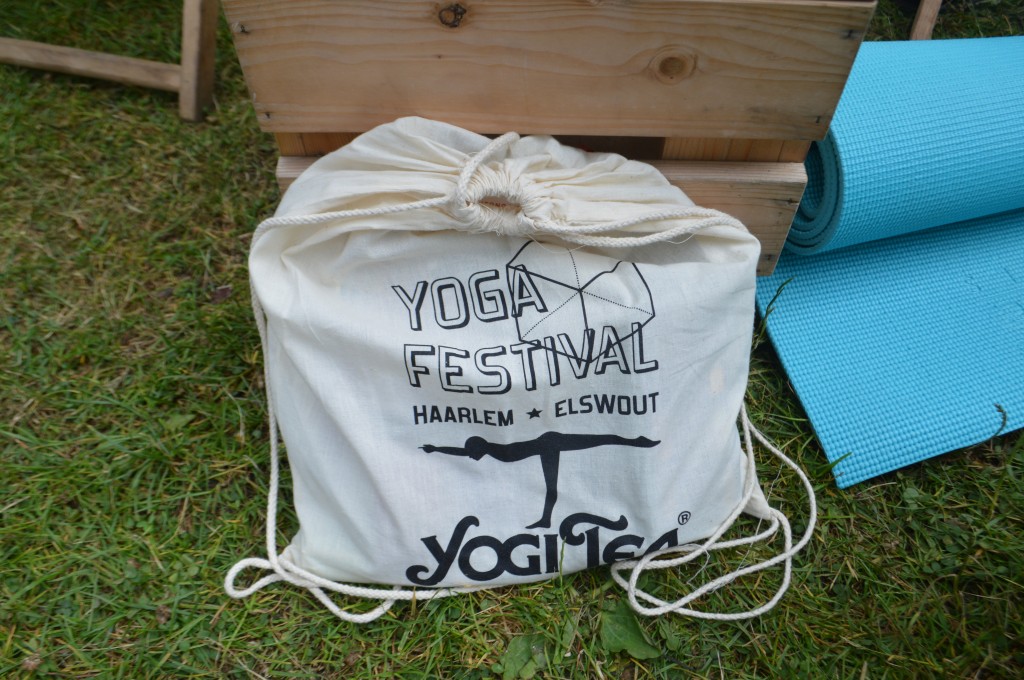 Yoga Festival Haarlem 2014 was a great success on all fronts. Not just in my experience, but I have heard both days sold out before 2 in the afternoon, all the tents were chock full with enthusiastic yogis and the general atmosphere was great.

People just relaxing in Savasana in random spots, having picknicks with their kids, browsing all the cool yoga goodies and healthy foods. Even the rain couldn’t ruin any of that.

I am super happy that I went (even though as I write this my arms hurt from all the Downward Dogs) and by the looks of it, this was only the first of many. See you there next year! 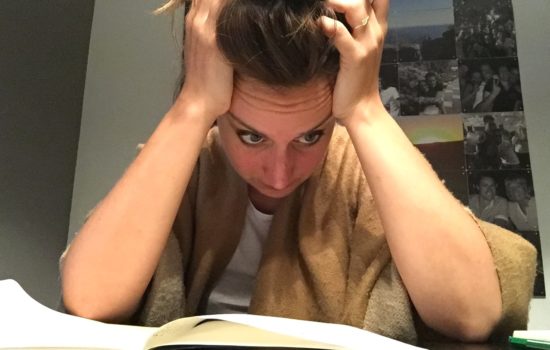 On Writing My Book