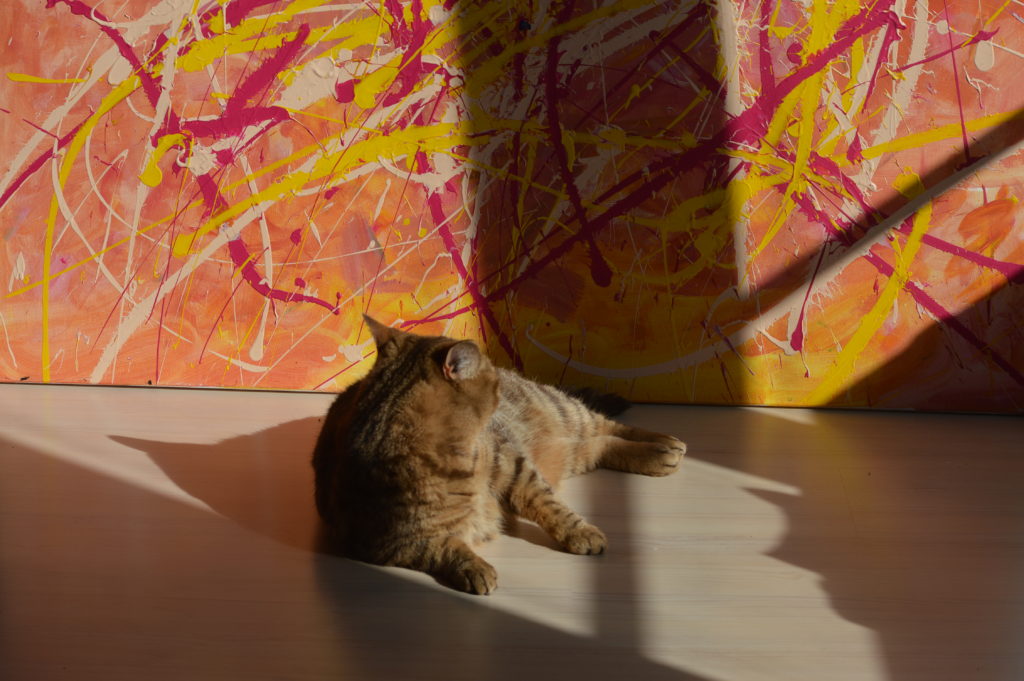 My cat, courtesy of Vincent (as it is actually his cat)

and my art, courtesy of Naomi (as she made it, I just bought it)

It’s a Saturday morning in December and I wake up with this absolutely CRAZY notion. This RADICAL idea.

I’m giving myself the day off.

You might think “eh…isn’t that what a freaking Saturday is for?”

And “weren’t you on overworked sick-leave in December?”

You’re totally right. I worked Mondays to Thursdays before, so technically my Fridays, Saturdays and Sundays were my time off. And yes, in December I was still recovering. I would return to work in January.

Yet, there I was. Sitting upright in bed, realising the idea I truly wouldn’t have to do anything that Saturday was nothing short of revolutionary and a completely new sensation.

Really spending the entire day at my leisure, doing NOTHING of value, nothing useful? Just doing whatever, just for fun?

And not continuously making todo lists in the back of my head? My brain sidemouthing me “you’re wasting your potential”, “oh, the things you could be doing” and “my God, you USELESS human woman!”

In my brain it didn’t really work that way. I never felt like I really had the day off, because I never HAD the day off.

An ACTUAL day off

Even when I wasn’t working, there was always something I could be doing. Writing, the Internet, thinking about future goals, household chores, admin stuff and to do lists to be made for the next day.

But as I thought about actually giving myself the day off, I got all happy about it. And it suddenly dawned on me I haven’t actually done this in YEARS. Sure, I’d relaxed before (thank God) and I’d definitely done nothing from time to time. But out of sheer exhaustion, or a hangover, or trying really hard to get something done but procrastinating my way through the day.

But I hadn’t taken a real day off in YEARS.

How I live(d) my life

It may not have looked that way, and I hardly make a dime off my Internet nonsense, but I take my writing ridiculously serious.

So if I wrote, I tried to write good shit. Which I love to do, but it takes time and effort next to my Normal People Job. And when I signed my book deal, I signed away more of my time to spend writing, this time on a project I have never done in this capacity. This meant that in my free time, there was always something I could have been doing for my blog or my book. So this meant that my Fridays, Saturdays and Sundays were never really 100% free time.

As I got more overworked I got more and more convinced I was an incredibly lazy waste of space. But in reality, I was still working 32+ hours a week, writing 3-4 blogs per week, writing a book, trying to exercise (both because I really liked it as well as feeling I had to to be a successful human being) and trying to keep a household from nearing the Hoarders DSM-V criteria.

There was always something to do. And when I wasn’t doing anything, I’d be beating myself over the head with everything I wasn’t doing that I could or should be doing. So I’d never really have a day off, not really.

I randomly decided that mid December morning that I wouldn’t have to do ANYTHING that day. I could goof off and mess around all day. Whether it would be playing videogames, reading in bed, going for a walk, whatever: I could just do whatever I wanted.

No agenda, no ‘this is useful if I get this done for project X/Y/Z’, nothing. And something clicked.

Because as soon as I decided I could do whatever and wouldn’t have to do anything, not write, clean or make plans for world domination, I IMMEDIATELY got super excited about it. And I thought: “Oh awesome! I’m going to clean the kitchen, go to a yoga class, write a few pages and look over my budget today!”

I instantly wanted to do ALL the things.

And suddenly I realized that this was the root of it all. I LIKE DOING THINGS.

THAT’s why I usually do things all the time. The problem is I don’t know how to fucking balance. Liking things and doing them would be great if I also managed to fucking pay attention to my energy levels (before it’s too late) and not make myself do shit when I needed to not be doing shit.

I didn’t know how to take time off, really. Physically maybe, but not mentally.

That particular day I let myself off for the day. I didn’t have to do anything, I could do whatever I wanted.

Yes. I wrote 5 pages for a Girl Does Yoga, read a self help book, cleaned the kitchen. Sure, there were episodes of New Girl, there was Chocolate & Chill, but I navigated through my day off wanting to do things, doing them and also relaxing. Sans guilt.

Because FUCK that guilt. You know that guilt where you’re doing something fun, or when you’re on the couch and watching your dumb TV shows you love and there is this nagging in the back of your head you should be doing something productive? Making you feel shitty, and unable to REALLY enjoy your TV show or your cupcake or your conversation with your friend?

That guilt has absolutely no purpose in life. It doesn’t make me do things! Instead it makes me feel bad about myself, which makes me procrastinate and hide from what I have to/ want to do. That guilt occupies my mental space, leaving no room to enjoy or relax or think about good things.

So fuck that guilt.

Only that morning, it dawned on me I know nothing about balance, ACTUAL balance.

I had been so rigid and black-and-white in my thinking about how to live life. I was always moving and moving.

I only ever wanted to be active. Somehow the idea stuck that passivity and not-doing-things was a terrible sin. Not doing anything was a necessary evil in my book. Something for the lazy people, and the last thing I ever wanted to be was lazy. That’s why my bullet journal was filled with epically long to-do lists, and why I was always thinking I had to be doing something.

But that changed. I realized I HAD TO change this, actually. Because I can’t live this way and be happy.

All of these ideas were toppling all over each other on that December Saturday morning. My habit to never really take time off, mentally as much as physically. My tendency to use my free time for all the things that I like, including all the responsibilities I’ve taken on. And how important it is to really relax. Not faux-relaxing while mentally going over your to do list, not procrastinating while obsessing over your duties: ACTUALLY relaxing.

I’ve been trying to implement these lessons into my life ever since.

And it all comes down to this: I can’t be my most epic self if I don’t add enough downtime.

I’ve been looking for balance ever since.

That’s why I blog so infrequently, even though I know some of my readers really miss me and though I think the Internet could use my nonsense every now and then. I am focused on enjoying myself and taking care of the top priorities instead.

It’s why I try to write every day, but only have to do it for a little bit. I only write when I have the energy for it. I keep momentum but I’ve accepted that I can’t expect myself to crank out a manuscript in a few months time: that’s just not in the cards for me.

It’s why I only work out a couple of times a week, and spend the other evenings watching Rick&Morty, playing DeathSpank or reading the Throne of Glass series. And sleeping. Lots of sleeping.

It’s why I go offline from time to time. I get sick of everyone’s opinion, and all the online hatred. I don’t need all of that in my head. When I want to and when I’m well-rested, I come around again.

Balance, moderation. Finding an equilibrium between productivity and genuinely truly not having to do anything.

Allowing myself to relax, giving myself time off. It’s not always easy, but I know I have to pay attention to build in actual time off without responsibilities seeping in.

The point of this long-read?

I am not the only busybody in the world, and I’m definitely not the busiest body. You might be a lot like me, always spending your free days running around doing chores and checking off items on your various to-do lists.

And there is nothing wrong with that, unless you never stop to rest. You need that too. You’re not a robotic superhuman who recharges on sunlight and triple A batteries. Trust me when I tell you: It is so good to relax. It is so NICE to not have to do anything for a little while, and you’ll regain the energy you need to tackle the things you want to do.

That’s why this year I have been focusing on the essentials, and relaxing the rest of the time. It’s been doing me good.

So give yourself the time and opportunity for some R&R too.

And with that relatively obscure reference to the average millennial, I’m out. Bye, babies. My Favorite Work Out Places In Rotterdam