So, I was bored one day, went grocery shopping and came home with Albert Heijn’s super juices.

I love green juice – I make it myself a few times a week. But it requires some time and effort, and sometimes it’s easier to just grab something on the go: that’s when juices like this can come in handy. So this could potentially be great. Right?

I dedicate this taste test to two of my favorite online people: Femke and Aline. Because they’re hilarious on and offline, nothing could ever top their taste tests (click here for the other one) and I am not worthy.

You can guess from the title that I am not on board. But click on if you want to know why. 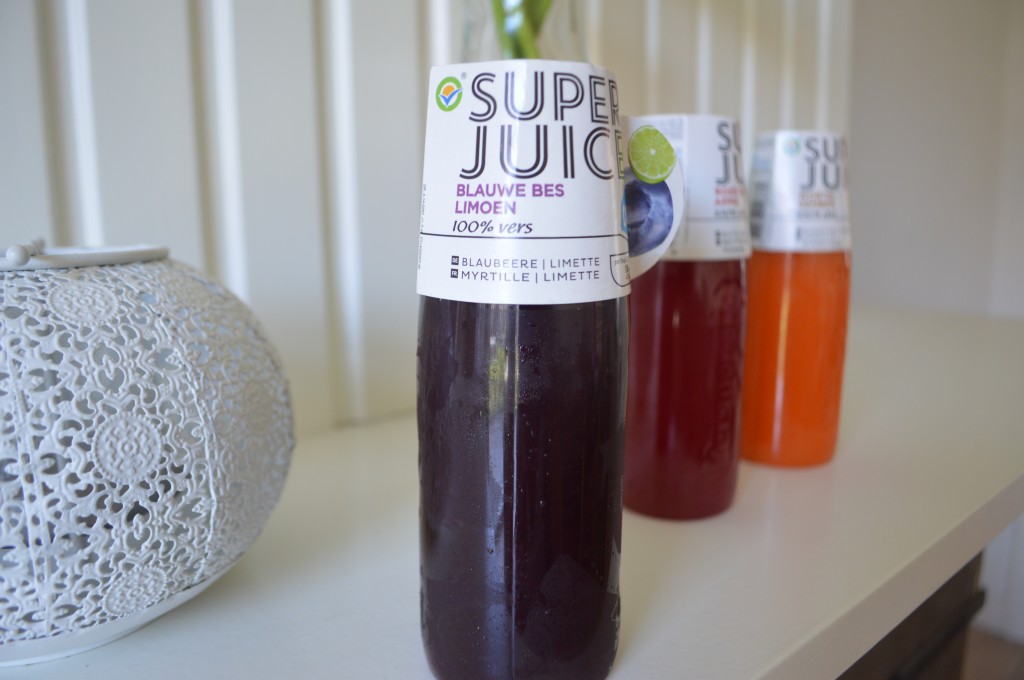 FIRST THOUGHT: Great! Blueberry has tons of anti-oxidants (but those may or may not have died in the making of this juice) and lime reminds me of mojitos. What’s not to love. 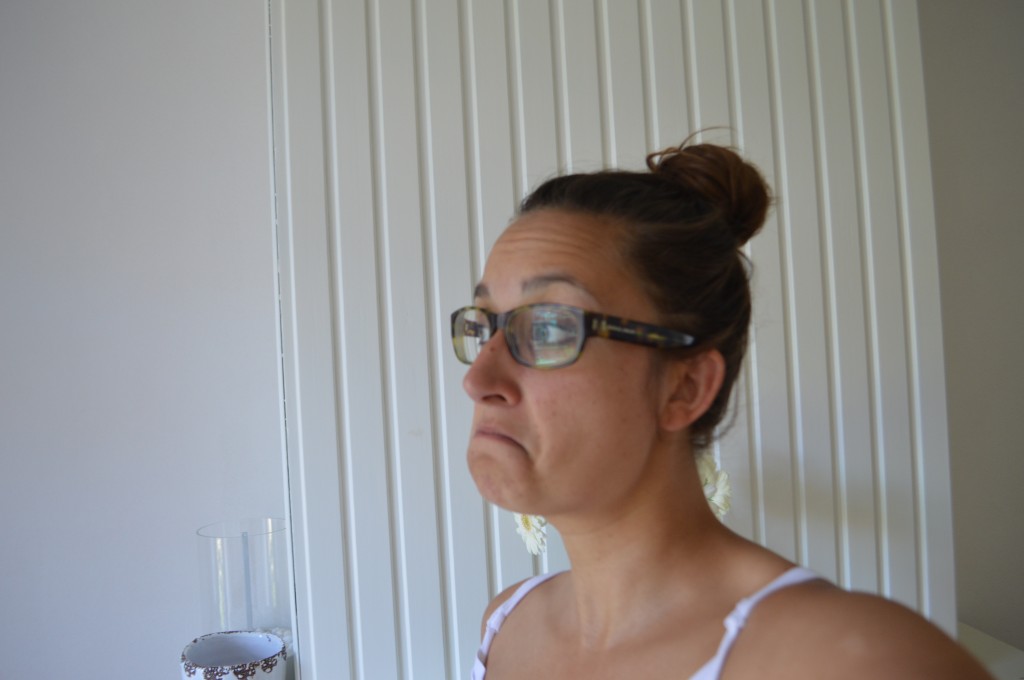 FACE VERDICT: Tastes pretty good. It does taste kind of blueberry-y, and has a slight tang of lime. In the distance. 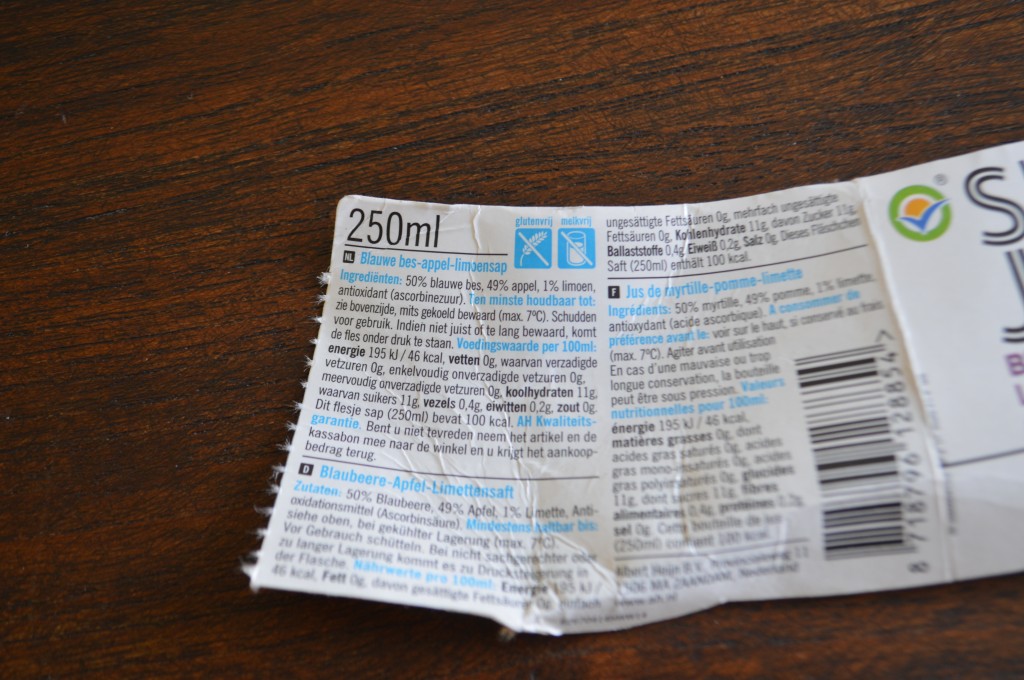 I want to be happy about the 50% blueberries, I do, but the name is total bullshit. With your freaking ONE percent lime in 250 ml juice?! This is Blueberry Apple Juice That Poses As Blueberry Lime Juice Because It Sounds Cooler. 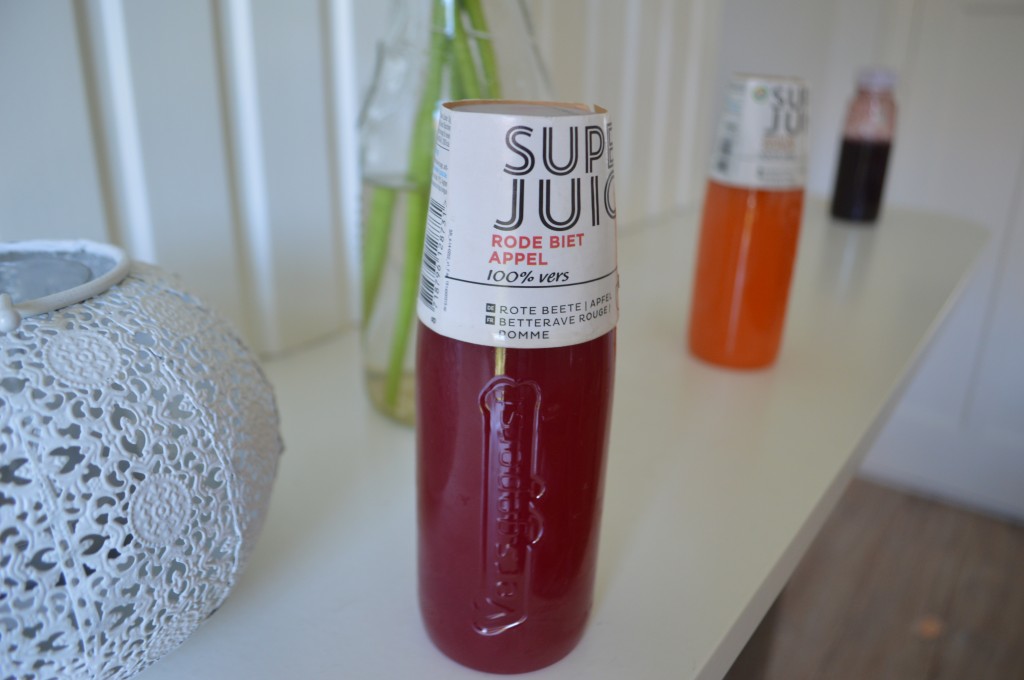 FIRST THOUGHT: Probably not going to be my favorite. The combo apple-beet is too sweet for my taste, but let’s give it a go. 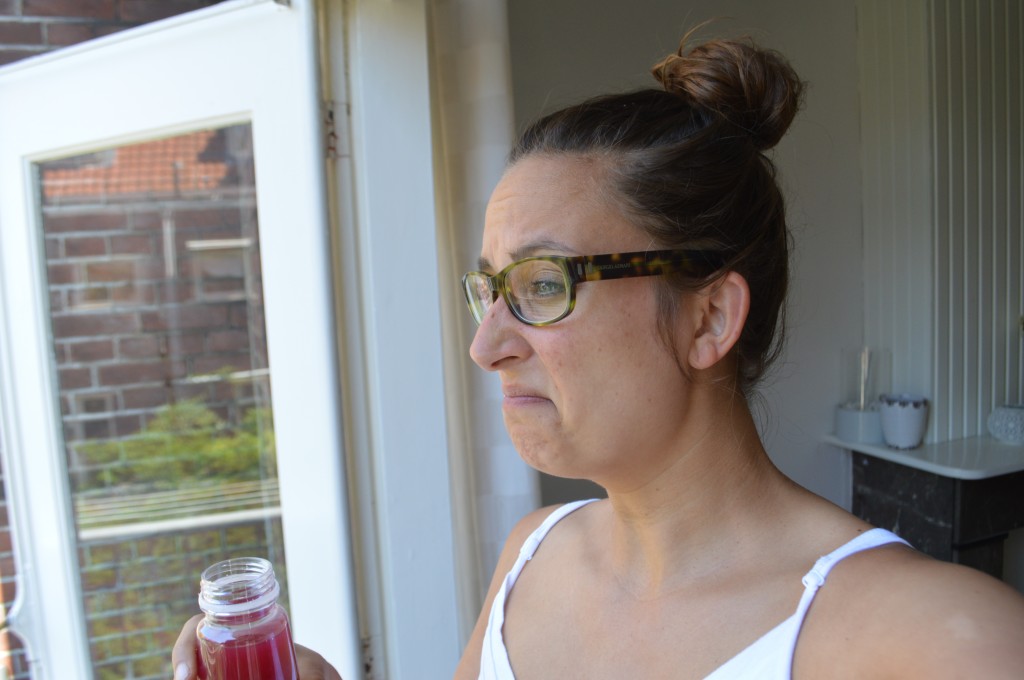 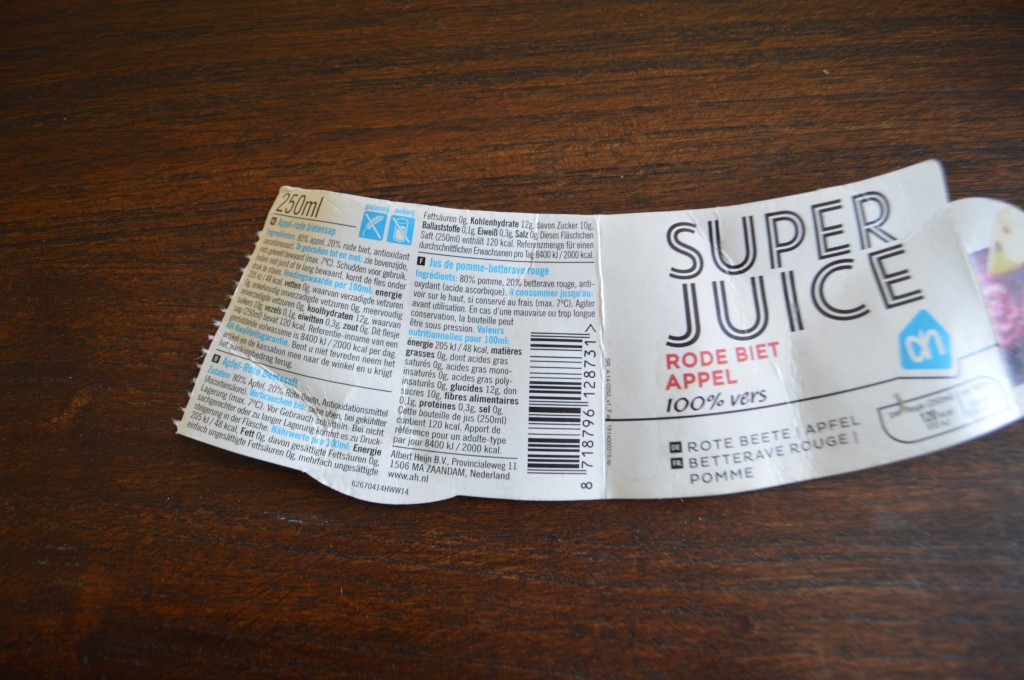 In vegetable juice concoctions it is better to have it the other way around: Only have one fruit for about 4 different veggies.

I find it misleading that they put Red Beet first in the super juice’s name. This is basically apple juice with just enough beet to fuck up the taste. Not nearly enough to actually be good for your liver and skin. Okay, another one.  Carrrot & Ginger.

FIRST THOUGHT: I don’t know, man. Ginger is a tricky thing to use, and carrot is going to make this very sweet. We’ll see. 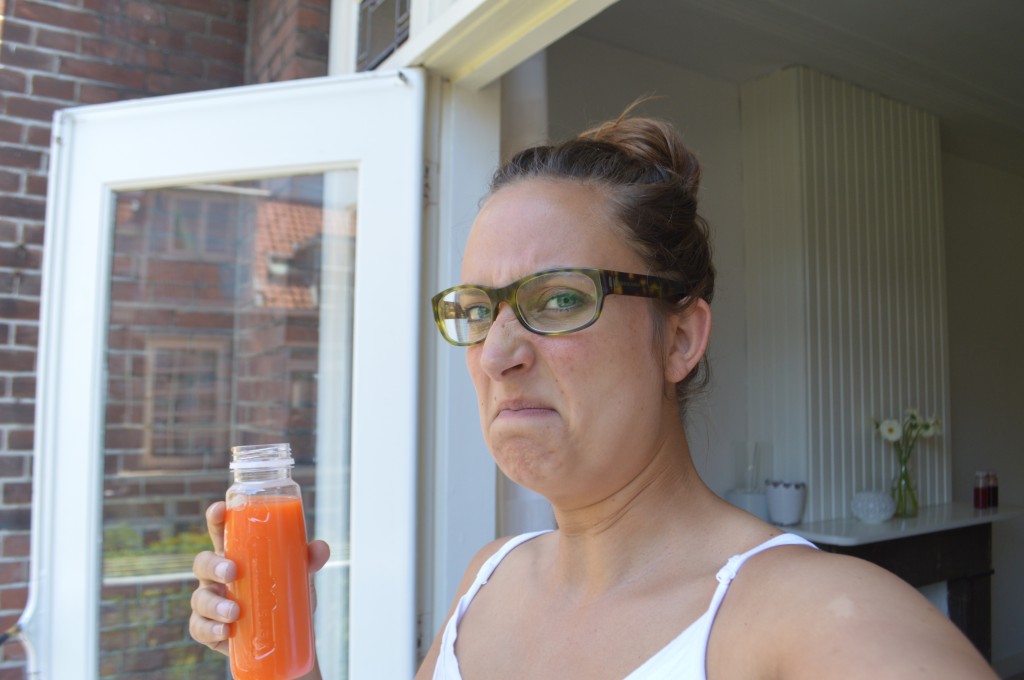 FACE VERDICT: Very sweet, and how I would imagine a baby food containing carrot would taste like. Again, I am not impressed. This is fucking orange juice. With carrot. And the pretence of ginger.

I cannot with the inaccuracy of the names of these Albert Heyn super juices and their actual ingredients. 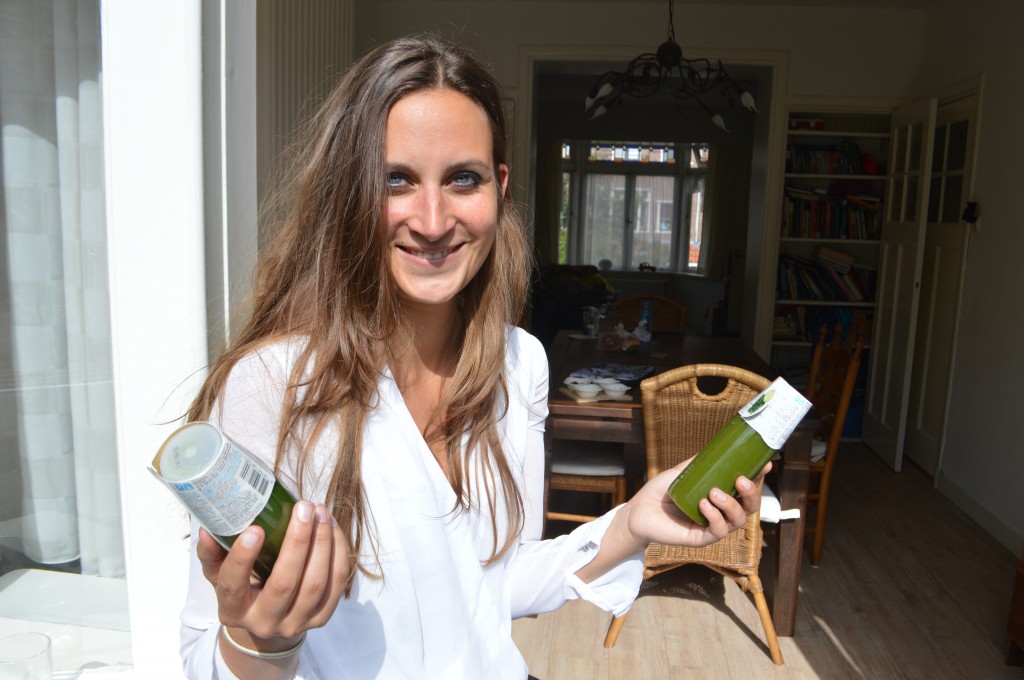 There is more: There were actual GREEN ONES TOO.

Let’s see what’s up with these ones. And let’s bring in an assistant. 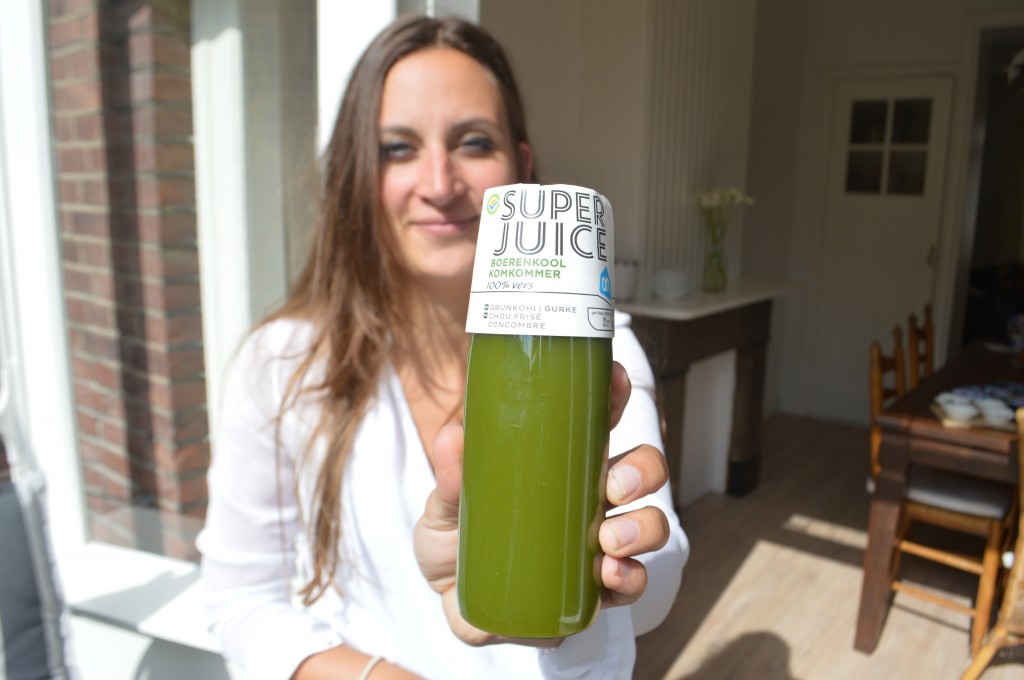 This one is Kale & Cucumber.

FIRST THOUGHT That combo (along with celery and green apple) is actually my favorite classic green juice. Let’s see in what ways it will disappoint me. I think it’s because I need my green juice to not be super sweet and this worked. The green leafy taste of the kale, the neutral flavour of cucumber and of course stuff that’s not in the title but that is probably in the green juice. WILL’S FACE VERDICT: I don’t remember exactly, but he wasn’t happy. He doesn’t like the really green ones. 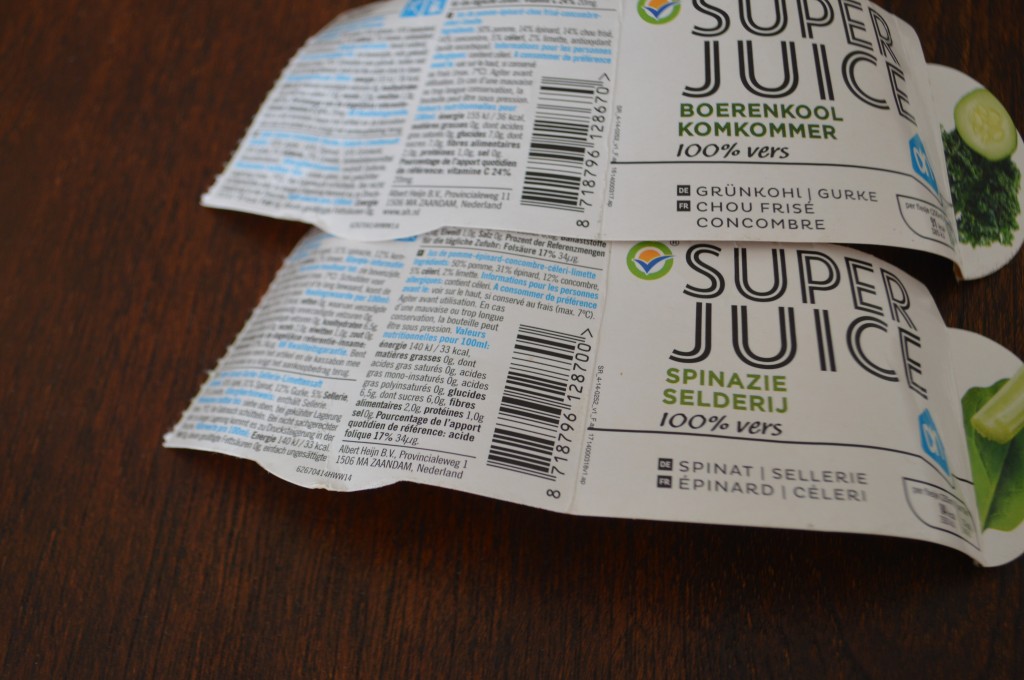 Huh. No wonder I liked it: although a bit overboard on the apple, this juice contains all the ingredients of my favorite green juice. Not as many objections on this one as on the other ones, except it should be named Apple-Leafy-Green-Cucumber if we are going to  be really truthful. 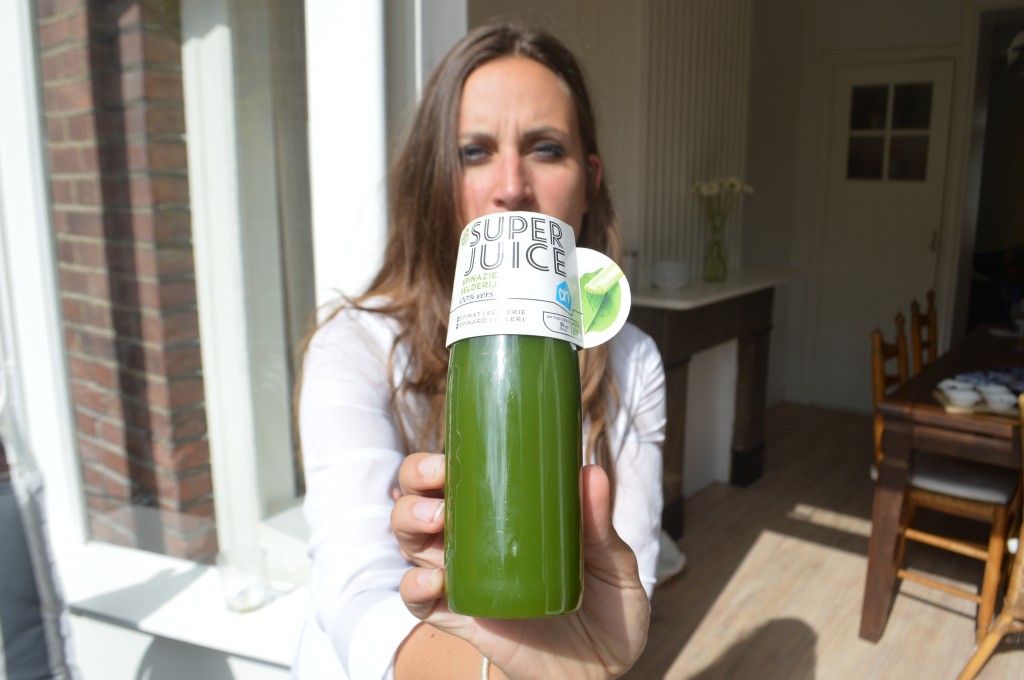 FIRST THOUGHT: How can this juice be greener than the juice with Kale in it?

Oh that’s right, because the kale one was actually only 15% kale. FACE VERDICT: If I had to describe this juice I’d say it was…inoffensive. You taste the green, but it’s pretty sweet and relatively mild. 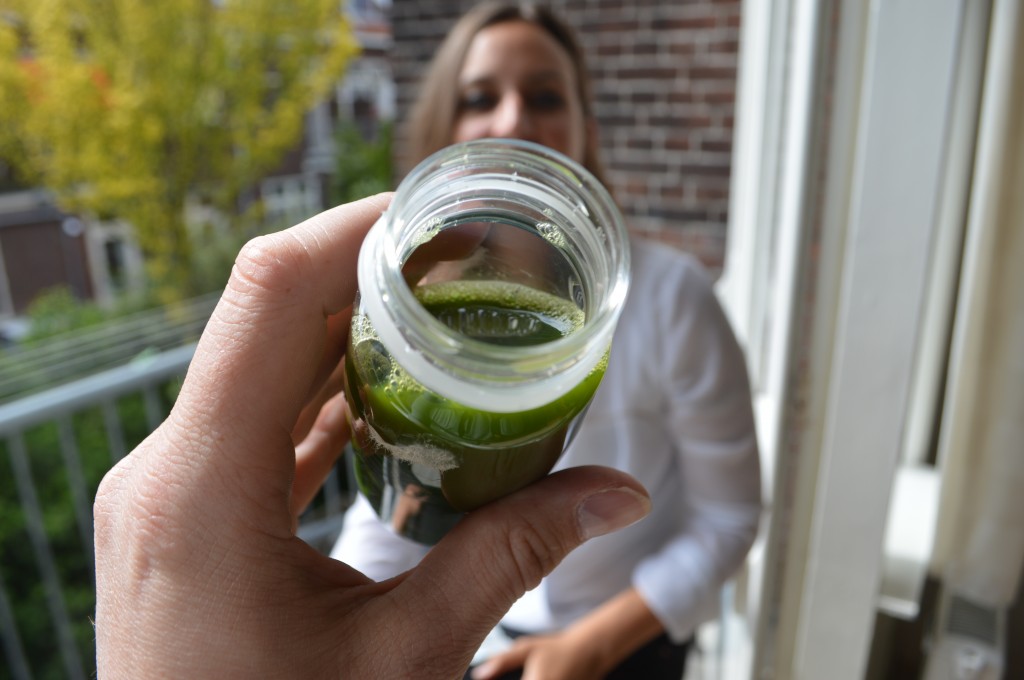 WILL’S FACE VERDICT: I remember he went a little “I’m never helping you with anything ever again” after this. I’m happy about the 31% being spinach, but calling something celery juice with only 5% celery in it? Psssh. GENERAL CONCLUSION:  Albert Heijn is a great supermarket and a total lifesaver at times; I love a lot of their products, but I think the Albert Heijn Super Juices are a total fiasco.

– The only one I’d buy again is the Kale Cucumber one.

– I do not agree with the way they are represented as “super juices” while they are a) probably not cold pressed and b) actually just mostly fruit juice.

– And the 2 and 0,5% of ingredients that are IN THE NAME OF THE JUICE? That is just ridiculous.

Let it be known though, that Albert Heyn’s Super Juices are not the only juices who pull this bullshit with customers: The Berry Company does the exact same thing, and many others with them. Even Frecious Juice does it, although I do know that their juice is really high quality.

Darling readers, when it comes to buying juices, you should accept that most of the time it’s just fruit juice, and if you like them I wouldn’t worry about that at all. But if you want to add good juice to your diet, really read the labels of what you’re drinking or get a juicer.

And maybe if you are going to drink green juice with actual greens and veggies in them (as well as their vitamins and minerals), just buy a good fresh one at a juice bar every once in a while. Kris Carr on Crazy Sexy Everything.